Posted at 10:23h in blog by Massimo Privitera

In the second week of April, HUBiquitous held its General Meeting in Dar es Salaam, Tanzania. The Consortium met with the various partners and provided an update on the project’s vision and mission of establishing a major sustainable collaboration mechanism for African and European Digital Innovation.

The general meeting lasted three days and included plenaries and workshops, as well as an external event with local Tanzanian digital innovation hubs organized by our partner DTBi.

On the first day, Dr. Amos Nungu, Director General of the Tanzania Commission for Science and Technology, gave a welcoming speech, reiterating the important role the HUBiquitous project is playing in fostering innovation in Tanzania. Afterwards,  the partners discussed the administrative status of the project, as well as the advancements on the deliverables due by the end of the month. On the same day, the Hubiquitous’ project managers discussed hub capacity building and made choices on the practicalities of the training. Finally, the consortium reviewed the relationship between the learning platform and the Application Business Boxes in regard to HUBiquitous’ programs and services.

On Wednesday, the partners elaborated on IoT to sustain African DIHs. Capacity building and the implementation of the Talent and Accelerator Programs were stressed in efforts to support local associated partners develop and exchange skills and generate new revenue streams. Another aim of the session was to better understand the connections and the complementarities between the two Programs.

The afternoon external event, which brought together several stakeholders from the Tanzanian innovation ecosystem, gave the partners a chance to present HUBiquitous’ goals and programs to the local hubs and the startups they support. During the event, the Hubiquitous’ Solution Lab was handed to three associated Digital Innovation Hubs. 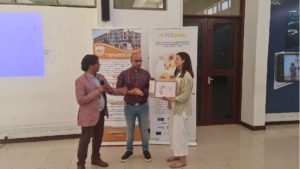 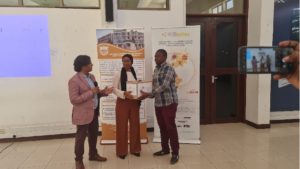 On the final day, the partners focused on hub involvement, expanding on the previous day’s conclusion by underlining the significance of training the trainers to assure the project’s success., and on the organization of Community Building activities in the near future (i.e., the African Innovation Week and the first soft-landing mission). Two more workshops were held in the afternoon to review recommendations, project KPIs, and the action plan, as well as the final project roadmap and independencies, where the project managers co-created the following phase’s action timeline.

The general meeting reaffirmed the importance of HUBiquitous’ mission to promote technical and business knowledge transfer to local Digital Innovation Hubs in order to train and skill IoT talents and shape Africa’s digital future. Looking back on the positive character of the general meeting, we look forward to future productive collaboration!

We use cookies on our website to give you the most relevant experience by remembering your preferences and repeat visits. By clicking “Accept All”, you consent to the use of ALL the cookies. However, you may visit "Cookie Settings" to provide a controlled consent.
Cookie SettingsAccept All
Manage consent

This website uses cookies to improve your experience while you navigate through the website. Out of these, the cookies that are categorized as necessary are stored on your browser as they are essential for the working of basic functionalities of the website. We also use third-party cookies that help us analyze and understand how you use this website. These cookies will be stored in your browser only with your consent. You also have the option to opt-out of these cookies. But opting out of some of these cookies may affect your browsing experience.
Necessary Always Enabled
Necessary cookies are absolutely essential for the website to function properly. These cookies ensure basic functionalities and security features of the website, anonymously.
Functional
Functional cookies help to perform certain functionalities like sharing the content of the website on social media platforms, collect feedbacks, and other third-party features.
Performance
Performance cookies are used to understand and analyze the key performance indexes of the website which helps in delivering a better user experience for the visitors.
Analytics
Analytical cookies are used to understand how visitors interact with the website. These cookies help provide information on metrics the number of visitors, bounce rate, traffic source, etc.
Advertisement
Advertisement cookies are used to provide visitors with relevant ads and marketing campaigns. These cookies track visitors across websites and collect information to provide customized ads.
Others
Other uncategorized cookies are those that are being analyzed and have not been classified into a category as yet.
SAVE & ACCEPT